Neck Pain can be debilitating and at our Arizona pain clinic locations in Phoenix, Scottsdale, Chandler and Glendale AZ our goal is to help you avoid surgery. The methods for pain management include:

Cervical Traction in the Medical Literature – Does Cervical Decompression Work?

Cervical traction has been used for many years for cervical pain and radiculopathy, as well as for relief of whiplash associated disorders and headache. It has also been used frequently for cervical arthritis pain from facet arthritis/facet syndrome. As you can see below, contrary to lumbar traction – cervical traction and cervical spinal decompression therapy actually works very well.

The following is a summary of the literature describing the effectiveness of cervical traction and neck decompression:

CERVICAL SPINE DISORDERS – A COMPARISON OF THREE TYPES OF NECK
TRACTION, BY ZYLBERGOLD AND PIPER

This was a randomized clinical trial to compare the effect of intermittent, static and manual cervical decompression traction on cervical spine disorders. One hundred patients (mean age 53 years; standard deviation 12.6 years) were randomly assigned to one of the three types of traction or a fourth group, which received no traction. The cervical disorders of cervical disc disease (59 patients), osteoarthritis (21 subjects), spondylosis (7 patients) and strains (21 patients) were distributed so that the groups were statistically equivalent. 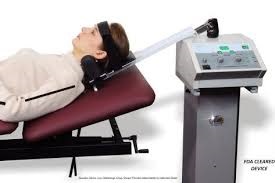 Each group received instruction in back care, moist heat for 15 minutes, a program of range of motion and isometric exercises and assigned traction or no traction. Treatment was given twice weekly for 6 weeks. Pre and post treatment measures of cervical ROM, medication use and present pain intensity assessed by using the McGill Pain Questionnaire were compared.

Although all of the patients improved significantly, patients receiving traction had better outcomes in terms of cervical spine mobility, decreased pain and less medication use. The authors concluded that cervical traction should be included in the treatment of cervical disorders.

CERVICAL RADICULITIS: TREATMENT AND RESULTS IN 82 PATIENTS BY HONET AND PURI

Patients were classified as to the severity of cervical radicular symptoms. Depending upon severity, they were placed in one of three treatment groups. Patients with minimal symptoms received over-the- door home traction at 15-20 lbs. Patients noted to have moderate pain with more profound clinical neurological deficit were treated as outpatients and required relatively heavier force (15- 55 lbs cervical traction on a clinical device in the supine position).

The few patients with severe, unrelenting pain were hospitalized. Fifty-eight of the 82 patients receiving cervical traction across all categories had “excellent” results, and eight patients had “good” results. Of the 16 patients with “poor” results, 13 were in the severe (hospitalized) group, and 9 of those patients went on to have surgery.

CERVICAL TRACTION AS A THERAPEUTIC TOOL BY VALTONEN AND KIURU

This study is based on 212 consecutive patients diagnosed with cervical syndrome and treated with cervical traction (cervical decompression). The mean age was 55 years with a range of 21-80 years. Thirty five percent had symptoms less than 4 months, 24% 4-12 months and 41% longer than 12 months.

The patients were treated with some form of heat and massage to relax the muscles, followed by cervical traction. The traction method was usually supine using a head halter and weight system. The traction was given 3 times per week for 4 weeks in the department of physical medicine. Sixty-one percent had complete relief or marked improvement of symptoms.

The authors concluded that cervical traction is a relatively good means of relieving symptoms of cervical syndrome.

A study of 26 consecutive patients (mean age 43.1 years, range 22-58 years) with cervical herniated nucleus (herniated disc) and radiculopathy were followed for more than one year. Twenty-four of the 26 patients were successfully managed with aggressive nonsurgical treatment including cervical decompression treatment (cervical traction). The 24 patients returned to full time work duties. Part of the treatment was cervical traction provided in a clinic followed by home cervical traction for all patients.

AN EVALUATION OF CONSERVATIVE TREATMENT INCLUDING CERVICAL TRACTION
FOR PATIENTS WITH CERVICAL DISK SYNDROME, BY MARTIN AND CORBIN

Sixty-one patients (72.2% age 40-70 years, 24.6% age 50-70 years) were diagnosed with cervical disc syndrome by a neurologist. Treatment consisted of various forms of heat and massage followed by neck traction (cervical traction) using a Sayre sling with the patient seated. A ½ inch felt pad was placed between the patient’s back teeth to reduce the discomfort of the chin strap force through the TMJ. The heat and massage were given to prepare the patient for traction.

Following the initial treatment period 67.2% had definite improvement. At follow-up (6 months to 5 years; average time of 23 months) 77.1% had definite improvement and were able to conduct their daily lives without difficulty. Only 2 patients had an adverse response to traction treatment and they were in the subgroup of 12 (19.7%) patients who required surgical treatment. The primary treatment was cervical traction.

The authors concluded that the primary reason for patient improvement was due to the cervical traction.

Neck pain comes from many different causes. Whatever it is, the Award Winning, Board Certified doctors at Arizona Pain Specialists may be able to help.

For a Consult at one of our Arizona pain clinics with one of our pain providers (chiropractor, PT/Rehab specialists, or Pain Management Doctor)