Fibromyalgia is a relatively new autoimmune disease that has no clear diagnosis, and also no clear treatment or cure. The first mention of the term “fibromyalgia” was approximately 35 years ago, when in the year 1976 a man by the name of Dr. Philip Hench described a specific syndrome that encompassed wide-spread pain in the joints, accompanied by fatigue and sensitivity.

He used the term “fibromyalgia” from the word “fibrositis,” which was a previously-used term around the turn of the century to indicate a condition of inflammation of the muscle fibers. Before the disease was formally named, however, two doctors named Dr. Hugh Smythe and Dr. Harvey Moldofsky conducted several studies on this painful condition.

While many in the medical world considered fibromyalgia to be a psychological disease, Smythe proved through a series of medical studies and tests that indeed this condition was one that involves very tangible symptoms of pain sensitization. (Smythe, H.A.,‘Fibrositis’ as a Disorder of Pain Modulation, Clinics in Rheumatic Diseases, 1979; 5(3):823-832)

Fibromyalgia is characterized by several tender points around the body. The tender points are found in specific locations around the neck, back, upper and lower extremities. More women than men suffer from fibromyalgia, typically in the age range 30 to 50. Those with fibromyalgia often experience headaches, diarrhea, constipation and abdominal pain associated with Irritable Bowel Syndrome (IBS). Patients often fight an endless cycle of lost sleep due to pain, which results in more fatigue and pain, which then in turn results in even greater sleep loss.

For those who suffer with this debilitating disease, finding a cure or even a treatment to lessen the symptoms can be frustrating. For many, treatment consists of endless dietary changes, homeopathic cures, medical and pharmaceutical analysis, tests of many kinds, and unwarranted advice from people who don’t understand the disease. However, effective treatment is available from doctors who are educated on the condition and the latest treatments.

So what is fibromyalgia exactly? By definition, fibromyalgia is stated to be, “A connective, soft tissue disease involving chronic, spontaneous, and widespread musculoskeletal pain, as well as recurrent fatigue and sleep disturbance.” (Magill’s Medical Guide, 4th Rev. ed.12-01-2008) To put it in more casual terms, it’s a vague disease that doesn’t typically provide any particular clear or identifying symptom. It tends to strike women more often than men.

Sometimes the pain and sensitivity “flare-ups” can be caused by any number of influences, and they can be different for everyone. For example, in some, diet can greatly influence the occurrence of a flare-up.  For others, the trigger might be a change in weather or high levels of stress.

While it’s difficult to pin-point what exactly triggers the onset of pain, most doctors will agree that pain itself is the most common symptom. A person can experience sharp muscle pain, tender joint pain, an all-over sense achiness, stiffness in the limbs and everything in between.

In addition to pain, most fibromyalgia sufferers typically also experience some form of weakness and fatigue. At times, that fatigue can be debilitating and interrupt normal daily activity. Along with those two most common symptoms are other symptoms such as: mental fog, irritable bowel syndrome (IBS), migraine or tension headaches, and some formof psychological disorders such as anxiety or depression. 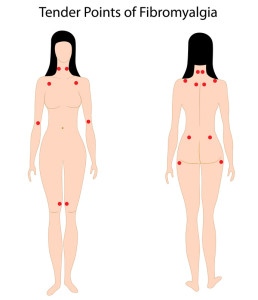 It’s unclear exactly what caused the disease in the first place. At this time, doctors and specialists have been unable to pinpoint what truly triggers the onset of this condition. Some have speculated that a specific physical trauma or injury set off the appropriate change of biological events, while others have suspected that low-grade chronic inflammation may have a contributing factor. Other probable but unconfirmed causes include: low serotonin levels, a particular virus or infection, and even outside environmental factors.

The American College of Rheumatology has set up guidelines for diagnosing Fibromyalgia. According to the ACR, a fibromyalgia diagnosis is made clinically by the doctor based upon a history of several areas of aches or pain for a minimum of 3 months and have at least 11 of 18 locations on the body that are significantly tender.

If a patient has a history consistent with Fibromyalgia, but does not quite meet the 11 criteria for the diagnosis, then the condition is called “Myofascial Pain Syndrome” and is still treated in a similar fashion.

For starters, it’s been understood that alternative therapy has played a significant role in easing the suffering of men and women who have fibromyalgia. Treatments such as acupuncture, chiropractic adjustments, physical therapy, massage, aromatherapy, homeopathic medicine, spa baths, relaxing herbals, music therapy and yoga have been shown to be effective in reducing the frequency and severity of flare-ups.(Wahner-Roedler, Dietlind L., Elkin, Peter L., Vincent, Ann., Thompson, Jeffrey M., al, Et.. “Use of Complementary and Alternative Medical Therapies by Patients Referred to a Fibromyalgia Treatment Program at a….” Mayo Clinic Proceedings 1(2005):55.)

Here is a list of Medication treatment possibilities which may need to be used in combination for best outcomes:

Along with medication management, emerging data is showing that  combination of treatments including acupuncture, physical therapy, and activities increasing physical movement (Rooks 2007) is becoming more popular.

Therapies that involve treating both the body and mind may help the most. These treatments can be especially helpful for Fibromyalgia: 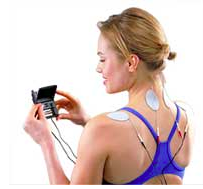 Arizona Pain Specialists offers both alternative and conventional treatments for fibromyalgia patients. Since the condition presents with considerable variety, the Arizona pain clinics include Award Winning and Board Certified pain doctors, chiropractors, physiotherapists, acupuncturists and behavioral therapists as well.